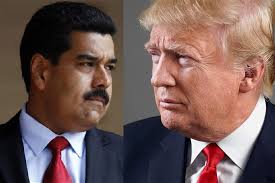 Venezuela’s Ambassador to Dominica, Jose Moros has called on US President Donald Trump to lift economic sanctions on his country as conflicts between Government and Opposition intensify.

And he says, a Facebook campaign has been launched to put pressure on the US to ease its policy on Venezuela.

At a press conference held Thursday at the Venezuelan Embassy in Roseau, Ambassador Moros said the current economic blockade imposed on Venezuela is a criminal attack against his people.

The Ambassador is also condemning the prohibition of the use of bank accounts to purchase medicine, food and raw materials.

He called on the US President to “leave the Veneuelan people alone and in peace.” is calling on Trump to leave his people alone.

Currently, the US Treasury Department has financial sanctions on 112 individuals, and the State Department has revoked the visas of hundreds of Venezuelans.