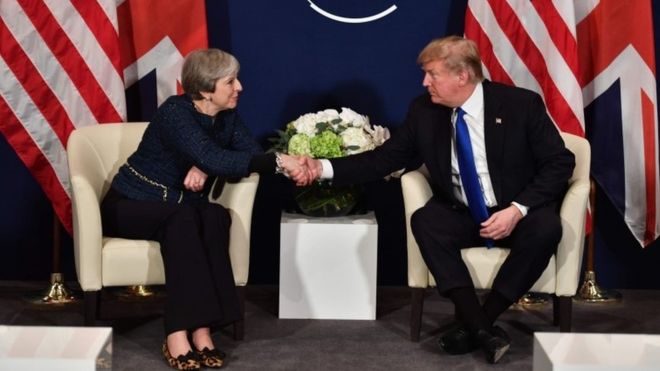 US President Donald Trump is to visit the UK on Friday 13 July, after previously cancelling a trip amid claims he would face mass protests.

It will not be the full-blown state visit Mr Trump was promised when Prime Minister Theresa May visited the White House in January last year.

But an invitation to a state visit still stands, the BBC understands.

He will hold talks with Mrs May, Downing Street said, with further details to be “set out in due course”.

The July date follows the Nato summit in Brussels which the president is expected to attend.

UK ambassador Sir Kim Darroch confirmed the date on Twitter, saying he was “delighted” that Mr Trump would visit the UK.

Mr Trump cancelled a planned trip to London to open the new US embassy in Vauxhall earlier this year, complaining the move to an “off location” south of the Thames had been a “bad deal”.

But critics said his decision may have been driven by a fear of protests.

Foreign Secretary Boris Johnson tweeted that it was “fantastic” news that Mr Trump would “at last” be visiting Britain.

$2 Million Dollars in Temporary Financial Relief for the Kalingo people

Barbadians will go to the polls to elect a New government on May 24.