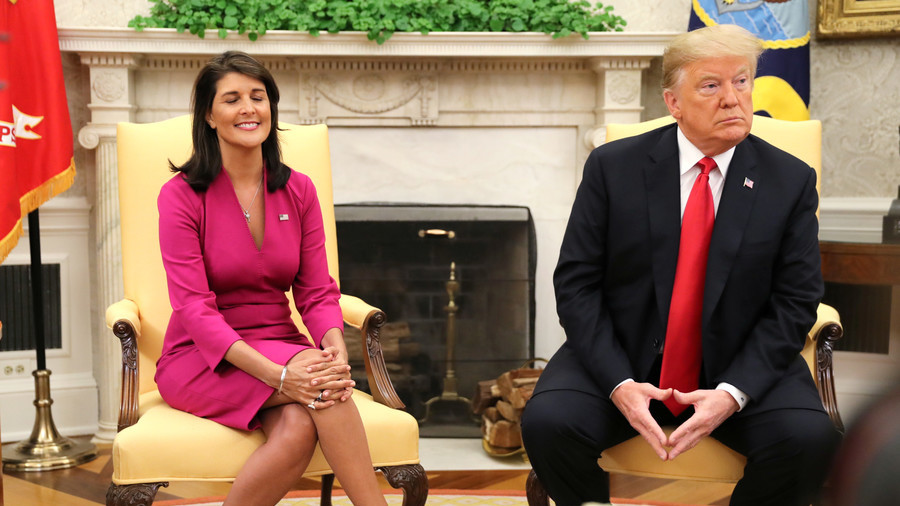 US Ambassador to the UN Nikki Haley has announced she is resigning – after nearly two years in the post.

President Donald Trump appeared in the Oval Office alongside Mrs Haley to say she had done “an incredible job”.

The 46-year-old former South Carolina governor – one of the few women in the Trump cabinet – gave no reason for her exit, but dismissed speculation she was planning to run for president in 2020.

Mr Trump said he would name a replacement in two-three weeks.

What did Haley say about her abrupt move?

Mrs Haley did not give details about her move – or what she would do next.

“It’s been eight years of intense time, and I’m a believer in term limits,” she said referring to her time in public office.

“I don’t have anything set on where I’m going to go,” she said.

Mrs Haley told journalists she would be campaigning for “this one”, pointing to Mr Trump.

Mr Trump said Mrs Haley had told him some time ago she wanted to take some time off.

What is the reaction to her departure?

Republican lawmakers praised Mrs Haley on Tuesday after news of her resignation broke.

Retiring Speaker of the House Paul Ryan said: “She challenged friend and foe to be better.”

South Carolina Senator Lindsey Graham said she had been “a true agent of reform” at the UN.

Senator Robert Menendez, the top Democrat on the Senate Foreign Relations Committee, called her departure “yet another sign of the Trump Administration’s chaotic foreign policy”.

He added that he is “deeply concerned about the leadership vacuum she leaves and the national security impact of her departure at this time of continued disarray”.