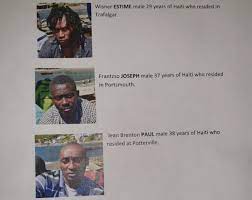 The police have confirmed reports that three Haitian nationals have escaped the quarantine Facility in Portsmouth.

The men fled the facility on Tuesday March 23rd.

The police are asking anyone with information on the whereabouts of these individuals to contact the Criminal Investigations department at 266 5165 or 266 5164.