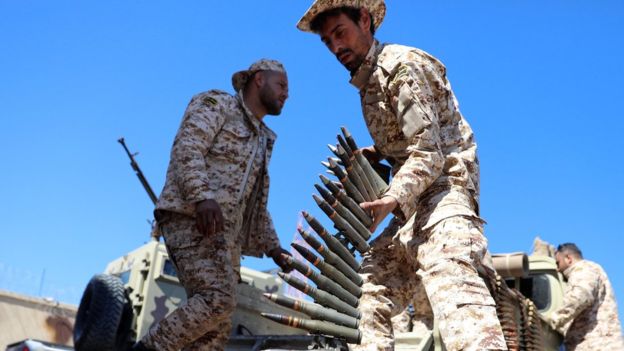 At least 2,800 people have fled from the fighting near Libya’s capital, Tripoli, according to the UN.

Other civilians are trapped by the clashes and are cut off from vital emergency services, it says.

Forces under Gen Khalifa Haftar began an attack on the city last Thursday with aim of wresting it from Libya’s UN-backed government.

Prime Minister Fayez al-Serraj has accused Gen Haftar of attempting a coup and says rebels will be met with force.

The ministry of public health said on Monday at least 25 people had been killed and 80 wounded, including both civilians and soldiers. Earlier reports had given a higher figure.

Earlier the UN appealed for a two-hour truce so casualties and civilians could be evacuated, but fighting continued.

In response, the EU and several countries including the US and Russia have called for an end to hostilities.

“This unilateral military campaign against Tripoli is endangering civilians and undermining prospects for a better future for all Libyans,” said US Secretary of State Mike Pompeo.

International powers have begun evacuating personnel from Libya amid the worsening security situation.

Libya has been torn by violence and political instability since long-time ruler Muammar Gaddafi was deposed and killed in 2011.

UN-backed talks were scheduled for 14-16 April to discuss a roadmap for new elections. It is unclear if these will still take place.