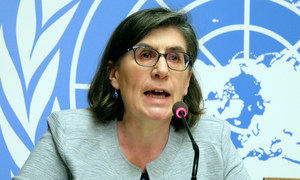 The top United Nations official in Haiti called Monday for a “democratic renewal” in the troubled, French-speaking Caribbean country to lift it out of a drawn-out political and humanitarian crisis and to put it back on the path to stability and development.

Helen Meagher La Lime, head of the United Nations Integrated Office in Haiti (BINUH), told the UN Security Council — meeting via video-teleconference — that the polarisation that has defined most of President Jovenel Moïse’s term in office has become even more acute, as civic space shrinks and acute food insecurity grows.

The UN said Haiti has been in the grips of a renewed crisis since Parliament ceased to function in January 2020, leaving the president to postpone elections and to rule by decree.

In response, the UN noted that large crowds have poured into the streets, echoing opposition demands for Moïse to step down.

“Only a democratic renewal, resulting from the prompt holding of credible, transparent and participatory elections, can provide Haiti with the opportunity to overcome its protracted political crisis,” La Lime said.