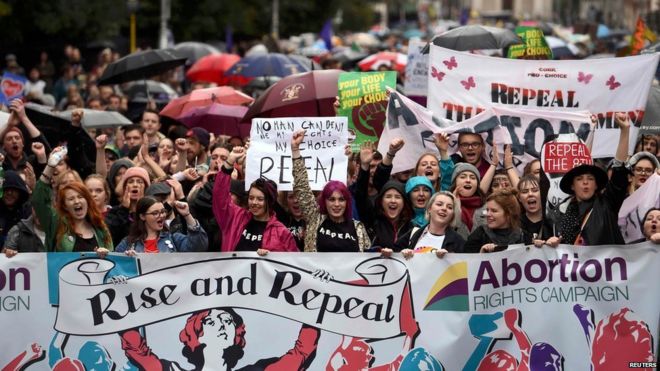 Voters will decide if they want to make changes to Ireland’s strict abortion laws, upheld in the Eighth Amendment of the Irish constitution.

It followed the passing of the bill to hold the referendum in the Seanad (Irish Senate).

Forty senators voted in favour of the bill with ten voting against.

On Tuesday, the government approved the main points of the law to be enacted if the referendum passes.

The Republic of Ireland currently has a near total ban on abortion.

Terminations are not permitted in cases of rape or incest, or when there is a foetal abnormality and thousands of women travel abroad for a termination every year.

The eighth amendment to the Republic’s constitution, introduced in 1983, “acknowledges the right to life of the unborn”.

However, there have been significant challenges and changes to the law in recent years.

A campaign to liberalise abortion gathered momentum in 2012, when Indian woman Savita Halappanavar died in a Galway hospital after she was refused an abortion during a miscarriage.

The referendum will be held just weeks before a planned visit to the country by Pope Francis, who will attend the World Meeting of Families in Dublin in August.