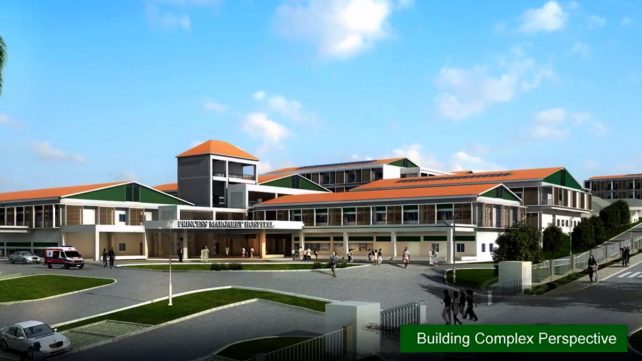 Phase one of the New National Hospital will be handed over to the Government and people of Dominica in May.

Wang Quanho, Chief Economic and Commercial Officer at the Chinese Embassy, says the new hospital will be named the Dominica-China Friendship Hospital. He went on that because of the complexity of the project it was divided into seven stages, with stage one being handed over in May.

The Emergency Department and the number one Medical Technology Building is expected to be handed over and put into use coming May. Quanho also explained that the medical service and office conditioning will be later improved.

The Chinese Embassy on Friday donated medical equipment and supplies to the Princess Margaret Hospital.

The donation, consisting of mainly urology and ophthalmology equipment and supplies is valued at two hundred and forty- one thousand, seven hundred and eighty Eastern Caribbean dollars (EC$241,780.00).

The equipment and supplies will be used to support the Chinese Medical Team based at the Princess Margret Hospital, to provide more advanced medical services to the people of Dominica.

US President to meet with 5 Caribbean Islands