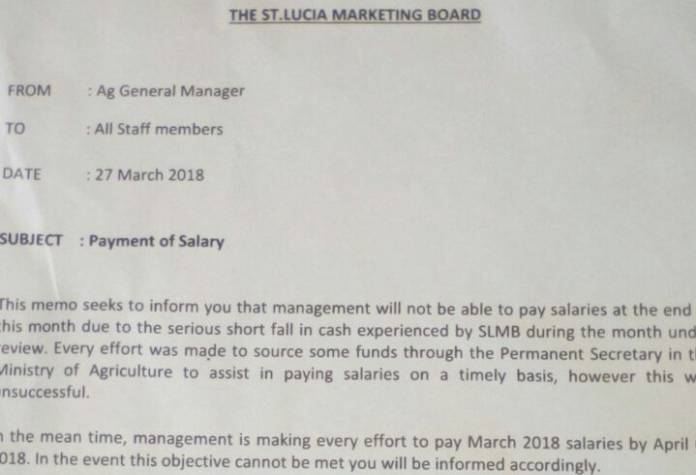 According to a memo dated March 27, 2018, from acting general manager, Therese Desir, the Saint Lucia Marketing Board (SLMB) has no money to pay last month’s salaries, apparently despite the government’s improved fiscal position and claimed three percent economic growth rate.

The memo to all staff members, headed “Payment of Salary”, said, “Management will not be able to pay salaries at the end of this month due to the serious short fall in cash experienced by SLMB during the month under review. Every effort was made to source some funds through the Permanent Secretary in the Ministry of Agriculture to assist in paying salaries on a timely basis, however this was unsuccessful.

“In the mean time, management is making every effort to pay March salaries in April 2018. In the event this objective cannot be met you will be informed accordingly.”

On May 9, 2017, prime minister and minister of finance Allen Chastanet delivered “austerity measures” in his budget presentation, including the SLMB: “Through the years several reports have been prepared making recommendations from closure of the Board, to restructuring of the shareholdings to full privatization. We have decided to solve this issue by winding up the operations of the Board within the upcoming financial year.”

In November last year, agriculture minister, Ezechiel Joseph, announced that the Cabinet had decided that two statutory bodies, the SLMB and the St Lucia Fish-Marketing Corporation, will be merged and the resulting entity funded through a public-private partnership.

An Indian court has sentenced Bollywood superstar Salman Khan to five years in jail for poaching rare antelope back in 1998.