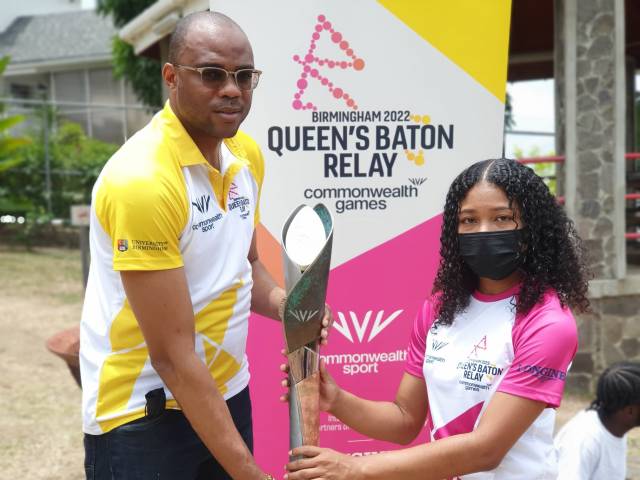 With just ninety days to go until Birmingham 2022, the Queen’s Baton arrived in Dominica on Thursday, reaching the 55th destination out of the 72 Commonwealth nations and territories it will be visiting.

The Queen’s Baton, which carries a message from Her Majesty the Queen, arrived in Dominica as part of its journey to the Birmingham 2022 Commonwealth Games, which will be held in England from 28 July until 8 August 2022.

President of the Dominica Olympic Committee, Billy Doctrove says the arrival of the baton is a sign of Dominica’s preparation journey to participate in the Birmingham 2022 Commonwealth Games.

The Queen’s Baton will be in Dominica for two days during which time it will be carried by Baton bearers, including current and legacy athletes, to visit several of Dominica’s unique sites. The Baton will be carried to pay an official visit to the President His Excellency, Charles Savarin among other activities.

The Queen’s Baton will be carried by “Changemaker Baton bearer” Adicia Burton; a 20-year-old young female who is a Kalinago Representative of the National Youth Council of Dominica, a Youth Parliamentarian and national Volleyball and Cricket player having represented Dominica at the Youth Olympic Games among other competitions.