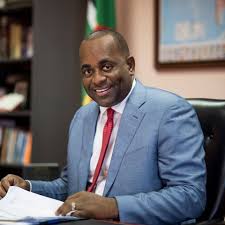 Prime Minister Roosevelt Skerrit in his address to the hand over ceremony, presenting new housing units to 52 families of Petite Savanne on Tuesday, has cautioned Dominicans that their vote in the next general elections is of utmost importance.

He stressed that citizens must be careful when casting their ballots

He Stated that “It is too important for us to play games with voting, and it is important that in the next election that every single Dominican and to vote for the correct party to continue to run the affairs of Dominica. This party is the only party with a vision,. with a plan, with a strategy and most importantly with the resources to implement that vision and that plan”

He continued that the current Government, the Dominica Labor Party, did not promise homes to the people of Petite Savanne, but they have constructed homes for these citizens.

The Parliamentary Representative for the Portsmouth Constituency Ian Douglas says the Bellevue Chopin resettlement is a striking achievement for the Dominica Labour Party.

“I dont think and i am subject to correction, but i dont think that there is anywhere else in the Eastern Caribbean now to date, as i speak that this level of housing, is being first, built for the people of the country and handed over to them free of charge, where an entire community is being reconstructed from the ground up before our eyes. This is absolutely remarkable and this has to do a lot with leadership.”

Douglas also stated  the housing project serves as a model for the rest of the Eastern Caribbean.

Roseau Fisheries To Be Rehabilitated