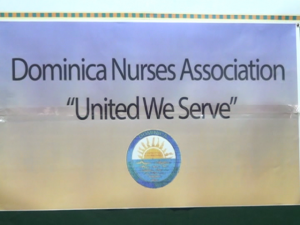 The Dominica Nurses Association has confirmed that they will continue protest action until a response is received from the Ministry of Health.

A handful of nurses held protest action at different locations in Roseau for four days last week to bring attention to what they claim are unsatisfactory working conditions.

The nurses have yet to receive any official response from government officials since before the protest action, when a letter was written to the Minister of Health addressing their concerns.

Rosie Felix, President of the Dominica Nurses Association stated that she refuses to stand for the poor working conditions that they are presented with on a daily basis and the security risks that they run, just showing up to work.  She went on that the nurses are not just demonstrating for themselves but also for their patients.

She explained that by nursing principles, “politics is an art of influencing the allocation of scarce resources which include money time personnel and materials. Politics is a means to an end, a means for influencing events and the decisions of others, nurses who renounce politics are essentially saying they do not want to influence events in their everyday work.”

Two New Murders Over the Weekend