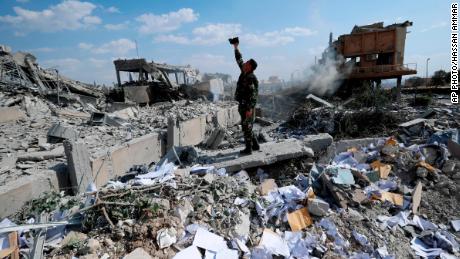 The United States, the United Kingdom and France are pushing for an “irreversible” end to Syria’s chemical weapons program, amid furious recriminations from Russia over the effectiveness and legality of a wave of US-led missile strikes on Syrian targets.

UN diplomats shared a new resolution, led by France and backed by the United States and the United Kingdom, calling for an independent investigation into the suspected chemical weapons attack inside Syria that precipitated the cruise missile strikes unleashed by the Western allies on Friday.

France’s ambassador to the United Nations, Francois Delattre, said Syria’s chemical weapons program must be dismantled in a “verifiable and irreversible way.”

The renewed push for a UN-backed diplomatic solution follows a volatile emergency meeting of the UN Security Council, called by Moscow on Saturday, with Russia’s UN ambassador, VassilyNebenzia, condemning the joint US-British-French strikes as a violation of international law.

The Russian-led response to the strikes, though limited to words, comes amid days of building pressure and talk among UN diplomats of a potential new Cold War.

UN Secretary-General Antonio Guterres has urged all Security Council members to show restraint, as US Ambassador to the UN Nikki Haley told the meeting that Washington remains “locked and loaded” to respond to any future Syrian chemical attacks.