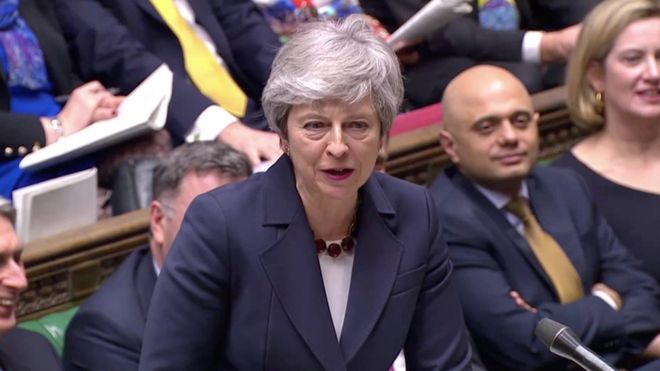 MPs are preparing to vote for their preferred Brexit option, with the PM due to meet Tory backbenchers in an effort to win them over to her deal.

Some have suggested Theresa May must name the date she will step down to have any hope of winning MPs’ approval for her deal at the third attempt.

The BBC’s Laura Kuenssberg said some leading Brexiteers were “tiptoeing their way” towards supporting her plan.

Jacob Rees-Mogg has said of the deal: “Half a loaf is better than no bread.”

He told BBC Radio 4’s Today Programme he did not “begin to pretend this is a good deal or a good choice”, but he would support the PM’s plan if it had the backing of the Democratic Unionist Party.

The 10 Northern Irish MPs are seen as the key to securing the deal, but they have urged Tory MPs to “stand firm” in their opposition unless there were “significant changes”.

Commons leader Andrea Leadsom said the government was still in talks to persuade the DUP to back it, along with other MPs on their own benches.

Meanwhile, the President of the European Council Donald Tusk told MEPs they “cannot betray the six million people who signed the petition to revoke Article 50, the one million people who marched for a people’s vote, or the increasing majority of people who want to remain in the EU”.