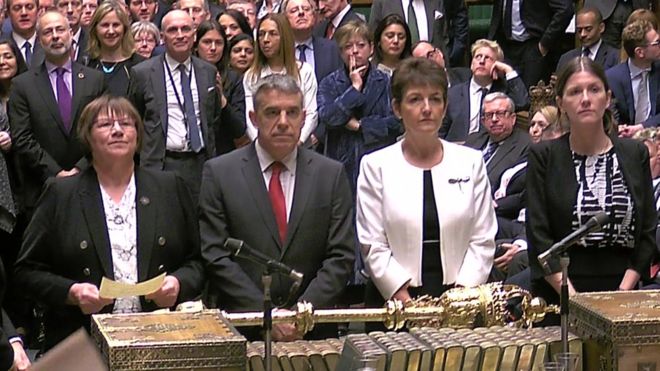 MPs have voted to take control of the parliamentary timetable in an unprecedented move to try to find a majority for any Brexit option.

The prime minister was dealt a fresh blow as the government was defeated by 329 votes to 302, setting up votes on Wednesday to find out what kind of Brexit has most support among MPs.

Theresa May has said there is no guarantee she will abide by their wish.

Thirty Tory MPs voted against the government, including three ministers.

Richard Harrington, Alistair Burt and Steve Brine resigned to join the rebels, with Mr Harrington accusing the government of “playing roulette with the lives and livelihoods” of Britons.

Former industry minister Mr Harrington said: “It’s absurd that now we are in a position of political impasse and… Parliament hasn’t actually talked about it on the floor of the House of Commons. That’s what I call a democratic deficit.”

Mrs May had tried to head off a defeat by offering MPs a series of votes on Brexit alternatives, organised by the government.

She said allowing MPs to take over the Commons agenda would set an “unwelcome precedent”.

But supporters of Conservative backbencher Sir Oliver Letwin’s cross-party amendment said they did not trust the government to give MPs a say on the full range of Brexit options.

Labour leader Jeremy Corbyn was among them. He said the government “must take the process seriously”.

He added: “The government has failed and this House must, and I believe will, succeed.”

He said MPs would want to find a consensus on the way forward, including a possible “confirmatory vote” on the PM’s deal by the public – something Mrs May told MPs earlier she did not want because Remain would be on the ballot paper.