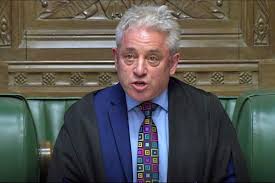 John Bercow has ruled out another vote on the government’s previously rejected Brexit agreement if the motion remains “substantially the same”.

He told the Commons that parliamentary conventions dating back to 1604 meant MPs could not be asked to vote on precisely the same subject twice.

Mr. Bercow’s ruling came as the government considers a third attempt to get the deal through Parliament.

He said the second vote on the prime minister’s deal was “in order” but any further votes must pass this “test” in order to be allowed.

Mrs. May had previously committed to holding a new vote on her withdrawal agreement in the coming days, but ministers have said this will not happen unless they are “confident” of victory.

Mr Bercow made his ruling in response to what he said were concerns from MPs that they could be “repeatedly asked to pronounce on the same proposition ad infinitum”.