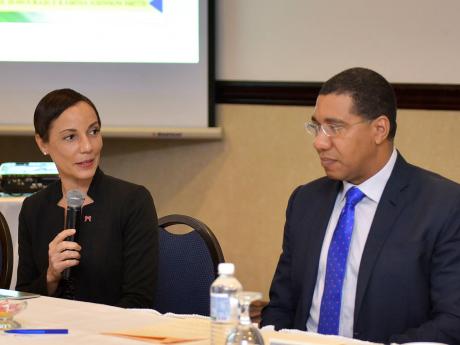 Speaking at a conference of local Executive Management, Heads of Mission and Consular posts at The Jamaica Pegasus hotel in New Kingston yesterday, Holness emphasised the critical need for the country to develop more of its own human capital.

“It is absolutely important for the Government to redouble its efforts, from a policy perspective and from an implementation perspective, to ensure that we do well in terms of measuring our human capital development (adequately),” he said.

To be launched on October 11, the World Bank’s Human Capital Index seeks to measure the degree of the health of children, teenagers, and adults as well as the quality and quantity of education that can be received by children until the age of 18.

Holness informed that the Ministry of Education, Youth and Information will become part of the Programme for International Student Assessment (PISA), which will be important to furthering the nation’s human capital development.

A worldwide study by the Organisation for Economic Cooperation and Development, PISA is intended to evaluate educational systems by measuring 15-year-old school pupils’ scholastic performance in the subjects of mathematics, science, and reading.

Meanwhile, the Prime Minister emphasised to the diplomats the importance of foreign policy as well as its importance to supporting economic growth.

He stressed the role that the diaspora must play in Jamaica’s foreign policy development and encouraged them to increase engagement with Jamaicans living abroad.

Holness also encouraged the diplomats to communicate with the diaspora and other stakeholders that the Government is addressing the crime situation.

“You are on sound footing to say that the Government acknowledges that there is a problem, we accept the gravity of it and we are addressing it, and we’re effective and are seeing results,” he said.

According to the Prime Minister, Jamaica has recorded a 20 per cent decline in murders.

In an interview with JIS News, Minister of Foreign Affairs and Foreign Trade, Senator Kamina Johnson Smith, said the conference, which has been on hiatus for seven years, is being held to align the Executive Management, Heads of Mission and Consuls with the country’s foreign policy.

“We also need to ensure that they are in alignment with national development policies,” she said.

Meanwhile, in her address to the diplomats, Johnson Smith emphasised the need for more systematic reporting from them to the ministry.

The conference, which began on October 8, will run until October 12 and is being held under the theme ‘Diplomacy in An Era of Constant Change: Jamaica’s Response’.