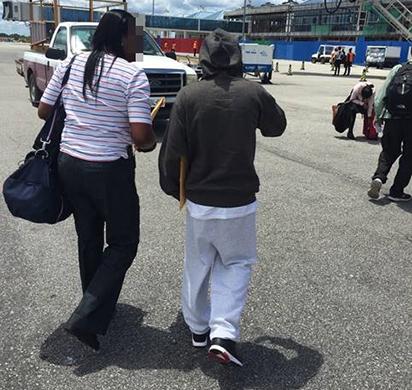 A 25-year-old Guyanese immigrant has been sent packing back to Guyana, where he is wanted for murder.

Bhupdeo was removed from the United States via a commercial flight and transferred into the custody of Guyanese law enforcement authorities upon arrival in Georgetown, the country’s capital.

Bhupdeo entered the US on a visitor’s visa on Jan. 2, 2016 and was authorized to stay until July 2016. On Jan. 7, 2016, Guyanese authorities in the East Demerara Magisterial District, issued an arrest warrant for Bhupdeo for murder and on February 2016, the U.S. Department of State revoked Bhupdeo’s visa.

Bhupdeo, however, failed to depart the United States in July 2016, as required and on September 2016, the HSI office in Bogota, Colombia, notified ERO New York that Bhupdeo, may be residing in the New York City metropolitan area, and was being sought in Guyana for murder pursuant to an Interpol Red Notice.

On Oct. 5, 2016, ERO deportation officers arrested Bhupdeo in Woodhaven, New York, and placed him into removal proceedings at the Hudson County Correctional Facility in Kearney, New Jersey. On July 26, 2017, Bhupdeo was ordered removed by an immigration judge, but appealed that decision to the Board of Immigration Appeals (BIA). On Feb. 1, 2018, the BIA dismissed his appeal, paving the way for his removal to Guyana.