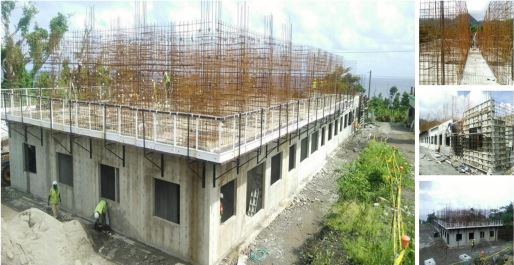 The contract for construction a new Marigot Hospital will be signed next week.

Prime Minister Roosevelt Skerrit made that announcement during a ceremony to hand over commitment letters to families to 64 housing units in Laplaine on Tuesday.

Mr. Skerrit says a state attorney has been assigned to ensure that Dominicans who have received housing units receive certificates of title.

Mr. Skerrit said, despite pessimism, Government will deliver on the promise of a new hospital.

“The country is not where we want it to be,” he said, “but we’re on the move, and there are many positive things that are happening in this country”.

The Prime Minister also praised the outgoing Parliamentary Representative for the La Plaine area, Petter Saint Jean, telling the people “…you cannot deny the fact that he has worked hard for this constituency”.

The Prime Minister urged people to take into consideration “…the contributions of our conscientious leaders”, and announced that the new housing complex in Laplaine will be named the Petter Saint-Jean Housing Complex.

Meantime Petter Saint Jean says 64 families will benefit, stressing that the units have been paid for with funds from the Citizenship by Investment Programme.

Opposition Accused of Being “Devoid of Ideas”