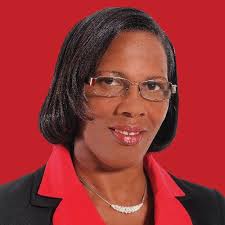 The ceremony was held at the Pointe Michel Roman Catholic Church with Fr. Brancker John as the celebrant.

Charles was previously married to Late Prime Minister Pierre Charles who passed away in office in 2004.

She has served as parliamentary representative for the Grand Bay Constituency since 2009 and will be replaced on the ballot at the next general elections by Edward Registe.