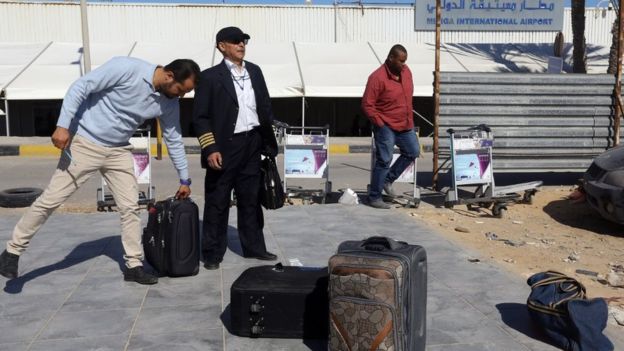 The UN has condemned an air strike that closed the only functioning airport in Libya’s capital, Tripoli, on Monday.

Flights at Mitiga International Airport were suspended and passengers were evacuated. No casualties were reported.

The UN blamed the air strike on forces loyal to General Khalifa Haftar, a commander from the east who is trying to seize the capital.

Prime Minister Fayez al-Serraj has accused him of attempting to carry out a coup.

At least 2,800 people have so far fled fighting around Tripoli, the UN says.

The UN also warns that those who remain risk being cut off from vital services because of the clashes.

Libya has been torn by violence, political instability and power struggles since long-time ruler Muammar Gaddafi was deposed and killed in 2011.

International powers have started evacuating personnel from the country in recent days as the situation has deteriorated.