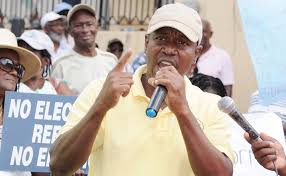 Five men were released from police custody late last night after being questioned on suspicion of conspiracy to overthrow the government.

Among them was political activist Loftus Durand who led the Concerned Citizens Movement in the lead up to the December 2019 general elections.

Kashma ‘Buju’ Richards of Newtown who, during the campaign, led protest action outside the state house was also held for questioning.

The men were picked up following a video posted to social media earlier this week expressing strong anti-government sentiment.

Attorney for the men, Ronald Charles spoke with reporters before his clients’ release on Thursday night.