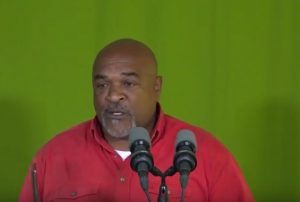 Minister for Housing And Urban Development Reginald Austrie says farmers who will be displaced due to the construction of the International Airport have already been consulted and are receiving compensation.

Government said last month it had prepared payments for landowners who are giving up their property, as well as to cover the loss of crops.

According to Austrie, landowners are cooperating with the Government.

Meantime Austrie says the government intends to fast track the construction of the international airport.

He says government will begin relocation before the year ends.