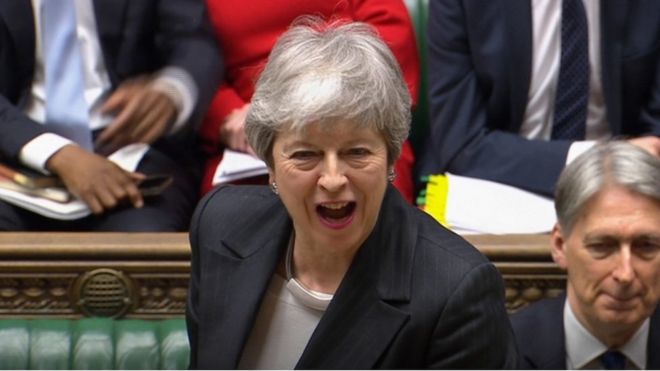 Theresa May has written to European Council President Donald Tusk to formally request a delay to Brexit beyond 29 March.

The prime minister told MPs she was “not prepared to delay Brexit any further than the 30 June”.

During a fractious PMQs, she said MPs had “indulged themselves on Europe for too long” and she wanted to avoid the UK taking part in European elections.

The SNP’s Pete Wishart accused her of “caving in to Brexiteers”.

In her letter to Mr. Tusk, the prime minister says she had wanted to hold a Commons vote on her withdrawal agreement this week but had been prevented from doing so by Commons Speaker John Bercow.

“Months of running down the clock and a concerted campaign of blackmail, bullying and bribery has failed to convince the House or the country that her deal is anything but a damaging national failure and should be rejected.”

Mrs May said MPs had “indulged themselves on Europe for too long” and she had rejected calls for a longer delay to Brexit because she wanted to avoid the UK taking part in European elections.

But the European Commission is telling EU leaders that the UK must take part in elections for the European Parliament if it stays in the EU beyond 23 May.

In a document seen by the BBC, the Commission says: “Any extension offered to the United Kingdom should either last until 23 May 2019 or should be significantly longer and require European elections.

US President to meet with 5 Caribbean Islands