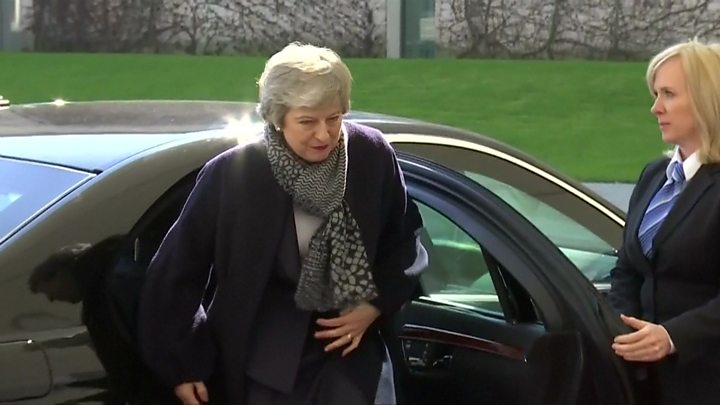 Theresa May is holding last-minute Brexit talks with the French President Emmanuel Macron, with the UK due to leave the EU in three days’ time.

The UK PM will urge Mr Macron to back her request to delay Brexit again until 30 June, having earlier met German Chancellor Angela Merkel in Berlin.

After the talks, Ms Merkel said a delay that runs to the end of the year or the start of 2020 was a possibility.

There is a summit on Wednesday when all EU states will vote on an extension.

Cross-party talks in Westminster aimed at breaking the impasse in Parliament finished, with both sides expressing hope there would be progress.

A draft EU document circulated to diplomats ahead of the emergency meeting of EU leaders proposes an extension but leaves the date blank.

The BBC’s Brussels correspondent Adam Fleming said the document refers to an extension lasting “only as long as is necessary and, in any event, no longer than XX.XX.XXXX and ending earlier if the Withdrawal Agreement is ratified”.

European Council president Donald Tusk said there was “little reason to believe” that the ratification process of the withdrawal agreement could be completed by the end of June.

In a letter to EU leaders, he said at Wednesday’s summit members should discuss “an alternative, longer extension” that will be flexible and “would last only as long as necessary and no longer than one year”.

Downing Street said Mrs May and Ms Merkel discussed the UK’s request for an extension of Article 50 – the process by which the UK leaves the EU – to 30 June, with the option to bring this forward if a deal is ratified earlier.

The prime minister and Chancellor Merkel agreed “on the importance of ensuring Britain’s orderly withdrawal”, a statement said.