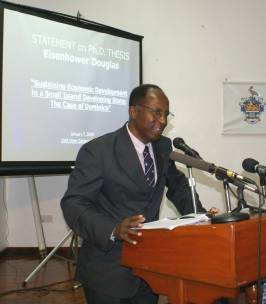 Former Director of Trade and Economist Dr Eisenhower Douglas is calling for greater collaboration among the people of the region in safeguarding the principles of the Caribbean Community CARICOM and the Organisation of the Eastern Caribbean States the OECS.

Dr. Douglas made the call at a seminar at the University of the West Indies to commemorate 52 years of the Dominica Labour party.

He believes CARCIOM has made significant strides over the last years and has brought the people of the region closer.

CARICOM and the OECS has replaced the West Indies Federation.

“The principles objectives of CARICOM as enshrined in its latest treaty 2001 are, improved standards of living for the people of the community that’s enshrined in the 2001 treaty , full employment of labour and other factors of production, accelerated, coordinated and sustained economic development and convergence, enhanced levels of international competitiveness and five expansion of trade and economic development with third countries.”

Dr. Douglas says the operations of CARICOM are supposed to result in the improvement in the lives of the people of the region.

Brexit MP’s Last Chance to Extend to May 22nd