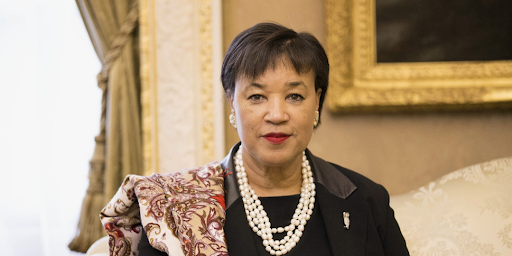 Lady Patricia Scotland, the Dominica born Commonwealth secretary general, will remain in the post until next year.

Following reports that UK Prime Minister Boris Johnson had used his role as chair of the Commonwealth organization to prevent Scotland’s reappointment, she has been given a formal written contract to remain in her post at least until the next Commonwealth heads of government summit, which is likely to take place in mid-2021 in Rwanda.

Scotland has been under fire from Johnson for alleged extravagance and internal audits which revealed some contracts had been offered outside the normal competitive tendering process.

Her first four-year term was due to expire this week, but before a virtual meeting of Commonwealth heads that she convened for Wednesday, the UK government sent her a letter extending her role until the summit.Boris Johnson said earlier this month that there was no consensus within the 54-nation Commonwealth for Scotland to be given a second term, and despite

the calls from some nations for her to be reappointed for another four years she remains on a form of probation.

Dominica and other CAARICOM states have supported Scotland’s reappointment to a second term as Commonwealth Secretary General.