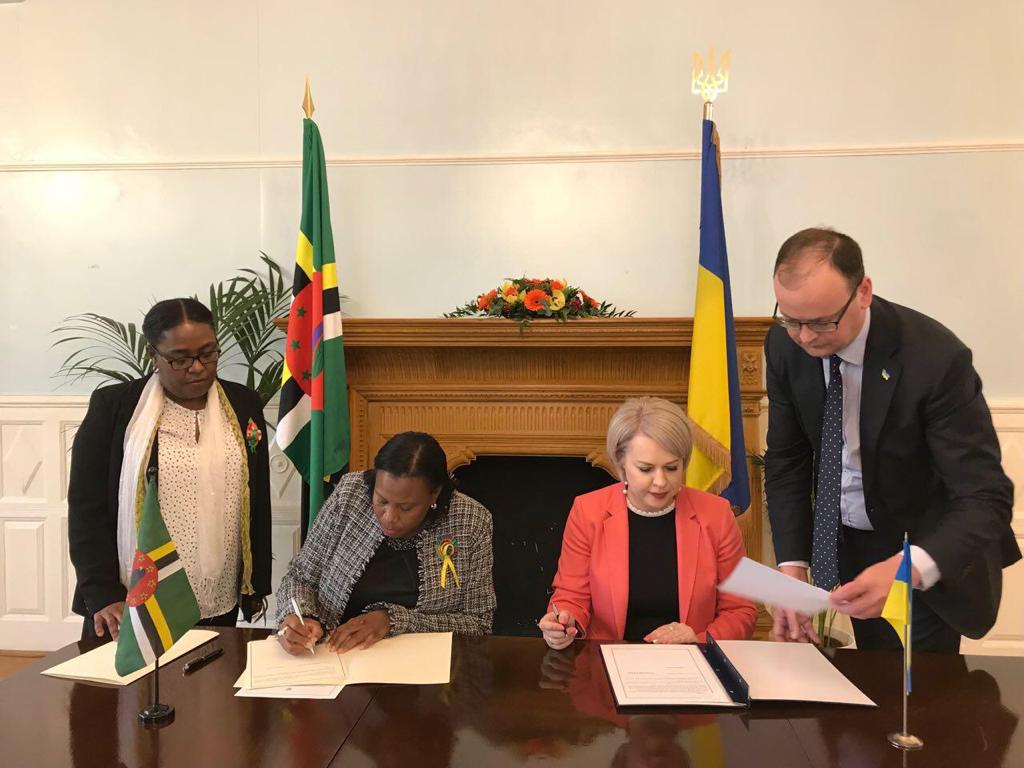 In other news this morning, Dominica has signed diplomatic relations with Ukraine, also signing a waiver agreement with the central- Eastern European country.

According to a press release from the Ministry of Foreign Affairs, on May 15 2019, the Commonwealth of Dominica concluded the signing of a Visa Waiver Agreement with Ukraine at a brief ceremony at the Dominica High Commission in London.

Acting High Commissioner, Janet Charles joined by her counterpart, Her Excellency Natalia Galibarenko, Ambassador of Ukraine signed an agreement on the exemption of visa requirements.

The agreement will allow citizens visa free access to each other’s country.

According to the release, preceding the signing of the visa waiver agreement, a joint communique establishing diplomatic relations between Dominica and Ukraine was signed on the 25th of April during a brief ceremony at the Embassy of Ukraine.

Acting High Commissioner Charles informed the Ukraine Ambassador that this is the beginning of a new relationship between Dominica and Ukraine and an opportunity for both countries to form partnerships and cooperation in areas of mutual interests, such as investment and tourism promotion.  The release states that both diplomatic envoys agreed to work more closely and to forge partnerships in these and other areas.

Dominica established diplomatic relations with Colombia in 1992. This is the second visit of a Foreign Minister of Colombia to Dominica.

During the visit, discussions were held on regional matters including the First Ministerial Summit between Colombia and CARICOM scheduled for the 29th of June, 2019; the Colombia and CARICOM Trade Agreement as well as matters related to the OAS and Venezuela. Bilateral discussions focused on Technical Cooperation, Security, Disaster Preparedness, Health and Academic opportunities.

The two sides discussed, in particular, the ongoing project on cassava development being supported by Colombia in the Kalinago Territory and cooperation in the area of water resource management and skills training among other matters of mutual interest.

The parties concluded the signing of a Visa Waiver Agreement between Dominica and Colombia to allow citizens of both countries who are holders of Diplomatic, official and ordinary passports visa free access to each other’s countries.

“I was born to serve,” – Octavia Alfred