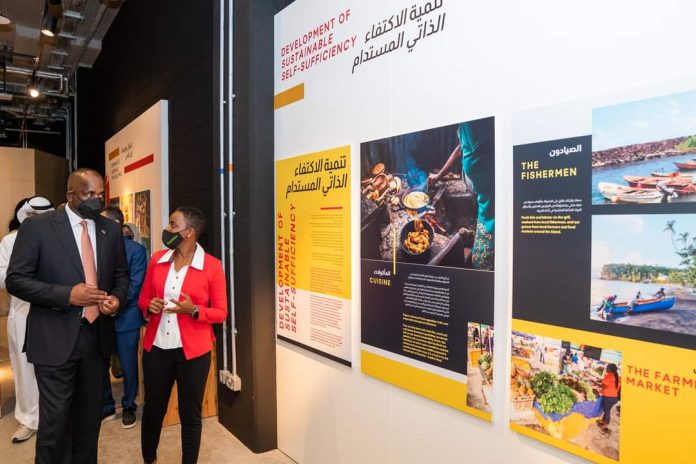 Dominica is receiving major exposure in the United Arab Emirates as the spotlight is on its tourism product and its Sustainable Development Credentials.

This as Dominica is featured at Dubai Expo 2020, where Prime Minister Skerrit visited the Dominica Pavilion on Sunday. The pavilion is showcasing the country’s tourist sites, cuisine, agricultural trade, among other features.

The Expo is a tool for economic, cultural, and social improvement, among countries. A record 192 countries are represented at this year’s event. The Dubai EXPO 2020 is the world’s first international exposition to be held in an Arab nation and the first to be held in the Middle East, Africa, and South Asia (MEASA) region. This year’s theme is ‘Connecting Minds, Creating the Future’.

A National Day on Saturday will be among the main highlights of Dominica at the Expo. A press release indicated that the day’s programme will start with a country parade followed by a ceremony and a cultural presentation. Tasha P will put on a show with bouyon and calypso and Kalinago dance and costumes, and bele dance will also be performed.

Dominica’s official delegation will be taken on a guided tour of the Dominica EXPO pavilion. Dominica’s participation is expected to build greater synergies with its global partners in the technology and innovation fields. The hope is also that Dominica officials can take away lessons in innovation, inclusivity, and sustainability.

Speaking ahead of the departure of Dominica’s Official Delegation to the event, Tourism Minister Denise Charles said she is excited about introducing Nature’s Island as the destination of choice with our many unique attractions. Charles is charged with overseeing our planning committee for the Expo.

The Dominica delegation comprises representatives from the Dominica Export and Import Agency (DEXIA), Invest Dominica Authority, the Discover Dominica Authority, and the Manufacturers Association. Dominica’s exhibits at the EXPO will include bottled water, herbal teas, traditional wear, and national cuisine. A contingent of artists and performers is also attending the event.

APP President and Alex Bruno at Odds Over Resignation Claims