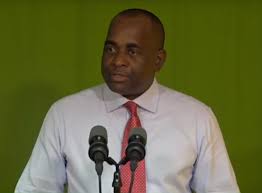 Prime Minister Roosevelt Skerrit announced on Sunday that Dominica now has no active cases of COVID-19.

This as Government considers the reopening of Dominica’s borders to regional and international travel.

Meantime Mr. Skerrit revealed that the much talked about international airport remains a priority project for his government.

He explained that with restrictions imposed by COVID-19, progress on the project had been delayed.