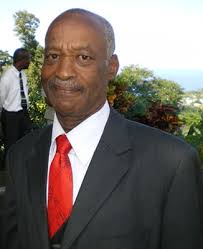 Ambrose George, Dominica’s Ambassador to Venezuela stated that the Dominica labor Party has been consistent in keeping with their guiding principles from inception to date.

George addressed a forum at the University of the West indies commemorating 52-years of the Dominica Labor Party.

He continued that the interest of the party remains the same, roads, health, shelter and food.

“Whilst many leaders have transcended the Dominica Labor Party the guiding principles have been consistent throughout, even from the presentation given by Dr. Honychurch looking at the one page manifesto”

A assessment was done of the three most recent leaders of the Dominica Labor Party, Roosevelt Douglas, Pierre Charles and Roosevelt Skerrit.

“Roosie Douglas, of course becoming the PM in 2000 inherited an economy which was almost brought to its knees by the previous regime, but his plan really was to use his international contacts to help solve the economic problems of Dominica but we all know that he passed away in 2000”

He continued with his assessment taking Pierre Charles into consideration.

“Pierre Charles on the other hand adopted a different approach, in-fact another principle of the DLP reaching out to the grassroots, we saw where Loblack and Mrs. Allfrey went along the length and breadth of Dominica speaking to the constituents, in a like manner, Pierre Charles in his approach went across Dominica to inform the (Dominican) people of the situation of the economy.

The current Prime Minister, Roosevelt Skerrit was also assessed. He mentioned that he came into power at the young age of 31-years-old and described him as an astute young man.

“Roosevelt Skerrit, a very astute young man taking the leadership of the DLP and prime minister-ship of the Commonwealth of Dominica, adhering to the very same principles of the DLP. We can say and I can say that he is a very decisive person or Prime Minister and willing sometimes to even operate outside of the box so to speak maintaining the principle of the DLP but being innovative and creative.”

Ambrose George concluded that the Dominica Labour Party has kept its guiding principles at heart, noting that its with consistency development will be found.

Russia and China at Odds with US over Venezuela