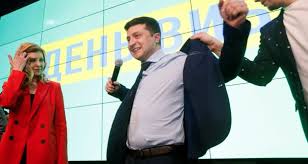 With more than 90 percent of votes counted, Ukraine’s Central Election Commission showed Zelensky, a political novice who is better known for playing a president in a TV sitcom, had secured 30.2 percent of the votes cast on Sunday.

“This is just a first step towards a great victory,” he told supporters on Sunday after the publication of the exit polls which showed a similar result.

According the official early count, only 15.9 percent of votes were cast in favour of Poroshenko, who has been in power since 2014.

“I critically and soberly understand the signal that society gave today to the acting authorities,” he said, accepting the results.

It was a different story for opposition leader Yulia Tymoshenko, who came third according to both the exit polls (14 percent) and the official early count (13.3 percent), but believed she secured enough votes to be in second place.