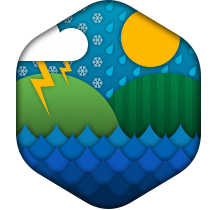 Mr. Trotman says this would be relevant more specifically for farmers since this is where production begins however adding, that such climate information must be accessible to those who need to use it.

He says further, that the idea is to look at things that are outside of the normal, what is not typical so one can mitigate against any potential of excessive climatic effects whether it’s wet, dry or heat waves.

Mr. Trotman expresses satisfaction that this project has built an awareness among the Agricultural Extension Services Community to be better appreciative and understand their climate, how it varies even at extremes, which is the first step towards strengthening decision support systems as far as climate information is concerned.

Meanwhile, participants at the one-day session Wednesday, say they felt better equipped to apply the principles set forth by the project which would help improve their production capacities both as individuals as well as those involved in agricultural groups.

One of the recommendations coming out of the project indicate that the PICSA is highly useful for farmers in Dominica and that opportunities should be sought to consolidate and expand its implementation on island as well as maintaining the current focus which empowers women and also men in agriculture.