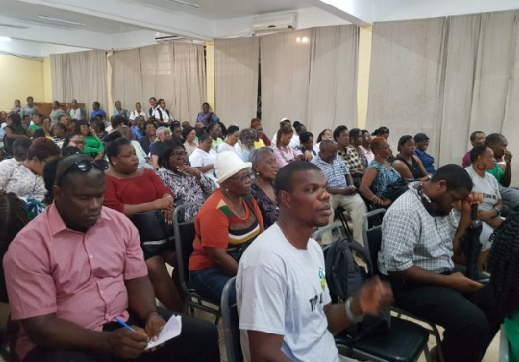 Government on Tuesday announced that Thursday September 19th will be a public holiday in Dominica.

Meanwhile there may be dissent brewing among some civil society groups following the announcement of a national holiday for Thursday.

At a United Workers Party Meeting with representatives of civil society on Tuesday, Anthony Leblanc, President of the Dominica Builders and Contractors Association and Thomas Letang, Public Relations Officer of the Dominica Public Service Union expressed concern about the day off.

In an address to the rally, Letang said, “This Union does not support what is going to happen on Thursday. Both myself and the President have been invited, but our position is that we will no attend, because had the Public Service Union called on its members a half- day off protest, moot Dominicans would say we are being wicked.”

Letang determined that it was unreasonable to call off a day of work to prepare for an event that begins at 4:00 pm.

he also announced that the PSY executive would meet in the coming week to determine the right method of protest action – not against the national holiday, but in support of the Opposition United Worker’s Party’s ongoing claim that Government has not accounted for 1.2 billion dollars in the national budget.

UWP leader Lennox Linton told the meeting his party had decided NOT to attend Thursday’s praise and thanksgiving concert.

61 Homes Given to Castle Bruce Residents