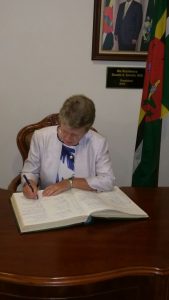 New British High commissioner to Dominica her Excellency Janet Elizabeth Douglas has presented her credentials to President of the commonwealth for Dominica His Excellency Charles Savarin.

Her Excellency Douglas says she please with the enormous strides that have been taken in recovery and rebuilding Dominica.

She says the recovery the country has made over a five month period is in no small part due to the resilience of the people of Dominica.

Douglas says 2017 was  very challenging  for the UK as that country faced a serious of terrorist attacks , a major fire which claimed several lives including some from Dominican origin.

Meantime his excellency Charles Savarin of Dominica has thanked her excellency Douglas for her expression of enthusiasm to further develop the bound of friendship and cooperation between Dominica and the UK.

Mr. Savarin is also hoping that the recommendation offered at the CARIFORUM-UK meeting held in March last year for the creation of the CARCOM CARFIORUM working group on Brexit will soon be implemented.

XCD$ 35 million spent towards the restoration of homes.