At least 82 Venezuelan nationals were deported to their homeland on Saturday amid concerns that among them were people seeking asylum in Trinidad and Tobago.
Advertisement [the_ad id="17256"] 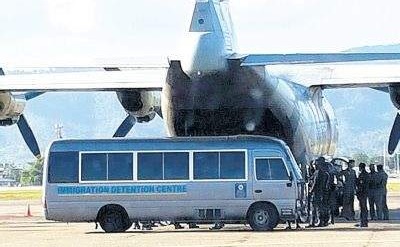 The Ministry of National Security in a statement issued late Saturday night said that 82 Venezuelan nationals including 29 women “were voluntarily repatriated…to the Bolivarian Republic of Venezuela with the assistance of the Ambassador of Venezuela to Trinidad and Tobago, Coromoto Godoy”.

It said that the government here had held discussions with the Venezuelan ambassador on April 18 to discuss arrangements for the Venezuelan nationals who were being housed at the Immigration Detention Centre, Aripo, back to their homeland.

At that meeting, Godoy offered to provide transportation by both and sea and air to ensure the successful repatriation of the Venezuelan nationals and during that meeting the diplomat had requested that the nationals being held at the detention centre “to process their travel documents.”

“This exercise was completed on the evening of Friday 20th April, 2018 where some 82 Venezuelan nationals were processed with the appropriate travel documents.”

It is to be noted that all 82 nationals volunteered to be repatriated and were placed on the aircraft provided by the Venezuelan Government.

It is also important to indicate that the Venezuelan Ambassador, Coromoto Godoy was on site to observe the proceedings. Chief Immigration Officer, Charmaine Ghandi-Andrews was also present to oversee the voluntary repatriation of the nationals,” the Ministry of National Security said.

But the Living Water Community( LWC), a religious based organisation that works with the United Nations Refugee Agency (UNHCR), said that it had received reports of Venezuelans being deported.

Domlec Electricity Services Notice to Pay as You Go Customers