Armed police have shot a suspect who took hostages at a supermarket in the southern French town of Trèbes.
Advertisement [the_ad id="17256"] 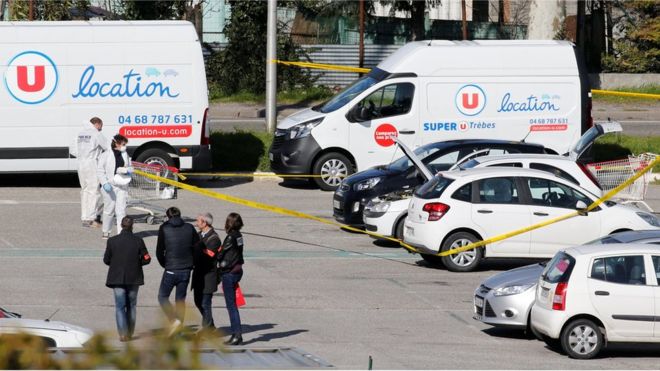 The gunman, who is reported to have killed three people, is now dead, said government sources.

Reports say the gunman, believed to be Moroccan, pledged allegiance to the Islamic State group.

He is believed to have killed and wounded his victims in three separate incidents which began in Carcassonne, 15 minutes’ drive from Trèbes.

There, he reportedly hijacked a car, killing one passenger and injuring the driver.

He also shot and wounded a policeman who was jogging with colleagues in Carcassonne.

The suspect is then believed to have driven to Trèbes, where he took hostages in the Super-U supermarket in the small town.

He is said to have been heavily armed and demanding the release of Salah Abdeslam, the most important surviving suspect in the 13 November 2015 attacks in Paris, which killed 130 people.

Reports say the suspect was known to French intelligence services and that his mother was at the scene.