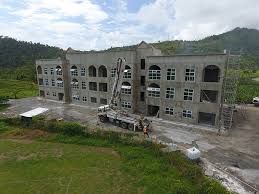 Prime Minister Roosevelt Skerrit has announced that 123 families are to benefit from new housing in the Castle Bruce constituency.

Mr. Skerrit addressed the candidate launching of Octavia Alfred who will contest the seat on a DLP ticket, on Sunday.

Mr. Skerrit said other development plans are on the cards for Castle Bruce.

“Very soon over 123 families will be receiving keys for their news homes,” Skerrit said.

“Rest assured that everyone will be housed in this constituency,” he added.

He said the DLP government would introduce fish farming and hydroponics to boost livelihoods in the Castle Bruce Constituency.

Meanwhile Mr. Skerrit pleaded with supporters to ensure they cast their votes at the next general elections to keep the Dominica La+bour Party in office.

He said jobs under the National Employment Programme, scholarships and aspects of the public support programme for the elderly would be threatened if the DLP was not returned to office.

Prime Minister Skerrit said Chekira Lockhart-Hypolite the candidate for Roseau South will be launched on June 2.

“I was born to serve,” – Octavia Alfred